Gold is the base of the money economy in international trade

If gold is just another commodity, why do the world’s central bankers use it to settle final accounts? Why aren’t bars of some other commodity stored in the vault of the Federal Reserve Bank of New York? Why didn’t they make “Diehard III” about a heist of, say, hard red winter wheat?

Central bankers don’t trust each other. They know how easy it is to create money out of nothing. They hold dollar-denominated assets, such as U.S. Treasury-bills, because they can earn interest — not much these days — but they settle their final accounts with each other in gold. If gold were just another commodity, there would be greater flexibility in settling accounts. They could choose a different commodity. But they choose gold. They did throughout the 20th century, even during World War II. That’s why they created the Bank for International Settlements in Basel, Switzerland. Western and Nazi bankers met with each other because each side knew that without a money economy, it could not win the war. Gold is the base of the money economy in international trade.

If You Could Design A Perfect World For Gold...

Are you sick of your gold just sitting there when it was supposed to have long since made you rich? Have you been fantasizing about a world in which your gold really does make you rich?

If so you’re in good – or at least numerous – company.

So let’s sketch out such a world.

Start by envisioning an America in which a handful of oligopolies have captured banking, media, healthcare and several other important industries, while a tiny group of super-rich neo-aristocrats control as much wealth as the 200 million least-rich citizens.

Toss in a US president who goes out of his way to pick fights which he then proceeds to lose, leading to both falling poll numbers and derisive headlines around the world.

That’s a good start but probably not enough to take gold to its rightful price of $10,000. So let’s add a US opposition party – which, given the above president’s declining popularity, has at least a 50-50 shot at taking power in the next election – that is skewing madly, unprecedentedly to the left. For more on the three most popular Democrats:

Meanwhile, imagine that that same opposition party recently gained control of the branch of Congress that can investigate the President, leading to an escalating battle between legislature and executive that adds an element of legal chaos to what would already have been a presidential campaign of off-the-charts vitriol.

Now that’s a crazy country where gold should be in demand.

But it’s just one place. There’s a whole big world out there where gold and silver can trade. For precious metals to truly go to the moon everyone, not just traumatized Americans, has to desperately crave sound money.

So let’s imagine France roiled by violent street protesters with numerous but nebulous aims, forcing a rattled government to ramp up deficit spending on pretty much everything that anyone seems to want. And let’s have misguided but at least emotionally stable German Chancellor Angela Merkel be pushed out of office in favor of no one knows what.

Italy has to be in there somewhere, of course. So let’s pretend its banking system has some insane amount of nonperforming loans. Maybe 18% of total loans – three times what would normally be considered extremely dangerous. We can’t even call that banking system a zombie. Instead let’s go with “persistent vegetative state.” 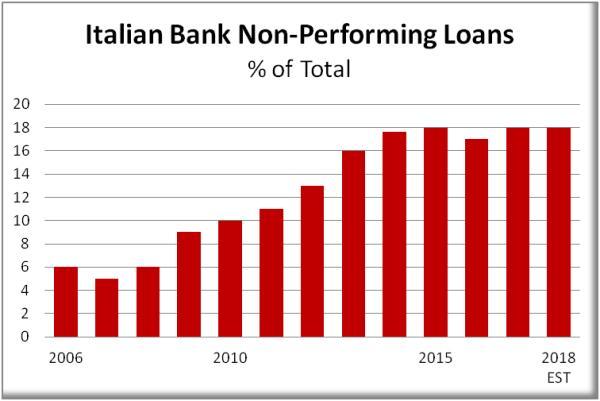 To sum up our hypothetical Europe, all its current problems require extremely easy money from both governments and the central bank for as far as the eye can see. Negative interest rates and an inflation target of 5% or more will soon be proposed by formerly-rational cabinet ministers and headline writers, and agreed-to by voters.

The required level of global chaos is getting close. We just need a dash of…China. Let’s pretend that it has quintupled its debt since 2008, in the course of which it recapitulated three generations of Western financial bubbles in one cycle, apparently without a sense of how those previous bubbles ended. And now it’s running out of new bubbles to inflate even as its growth slows to dangerously low levels. 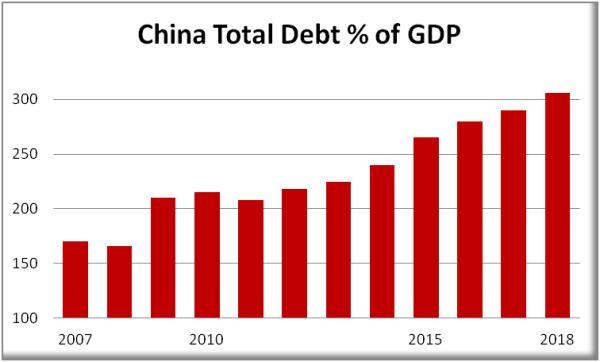 That should just about do it. So let’s step back and consider our precious metals paradise:

Just in case you missed the rhetorical device, none of the above is actually hypothetical. It’s all real, and heading this way fast.

Where will everyone hide in the dysfunctional world of 2019? In the old kinds of money that the Fed, ECB, and Peoples Bank of China can’t manufacture out of thin air when their debts finally come due. Of course.

In that world the demand for real money will rise to levels that are hard to imagine (since the human mind apparently can’t visualize the concept of “trillions”). It won’t be a fun world, or a safe world. But at least your gold will soften the blow.

Disclaimer
This article does not constitute investment advice and is not a solicitation for investment. DENARO does not render general or specific investment advice and the information on this article should not be considered a recommendation to buy or sell gold or precious metals. Each reader is encouraged to consult with his or her individual financial professional and any action a reader takes as a result of information presented here is his or her own responsibility.